With the full popularity of high-definition video recording in local conferences, video conferences, etc., the demand for high-definition recorders is increasing. Throughout the current record-recording machine system, most of them are high-end equipment of more than 10,000 yuan, or compatible machines with single functions but cumbersome operation. There is an urgent need for a practical model that is affordable, versatile, easy to operate, and has outstanding performance. This article recommended Chunyuan Liying WHD series HD network recording and broadcasting machine, has been listed for more than three years, the customer reputation is good, it is worth choosing.

WHD series high-definition hard disk recorder, because it supports multiple HDMI, VGA, SDI simultaneous input video, and has a wealth of network functions, to meet the requirements of high-definition video in different occasions. The models currently available are from 1 to 16 channels, and are composed of different combinations of HDMI, VGA and SDI input ports. Such as support 1 HDMI, 3 SDI input WHD-01, 3 HDMI, 1 VGA input WHD-11, 2 VGA, 1 HDMI, 1 SDI input WHD-12, 8 HDMI, 8 WHD-17 with 16-channel VGA input and WHD-18 with 16-channel VGA input, guests can flexibly choose according to their needs. This article takes the representative WHD-02 as an example to briefly describe the rich functions of the WHD series video recorders.
First, the panel function and input and output interface 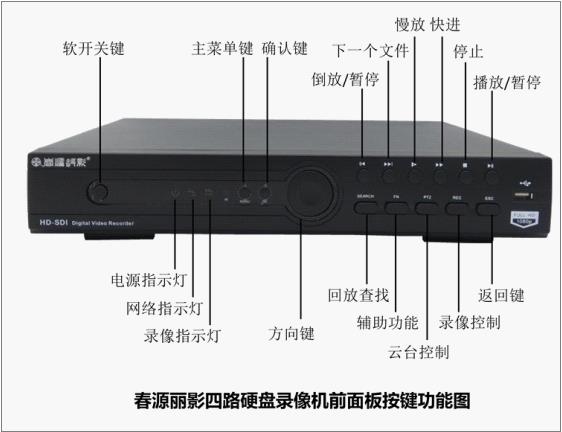 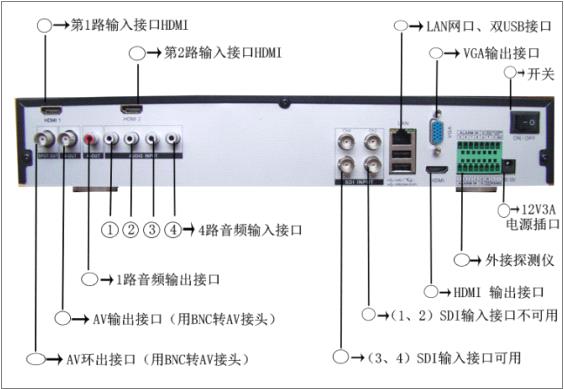 Second, the basic functions
1, interface layout
WHD-02 model, a total of 4 video input interfaces, respectively, 2 HDMI, 2 HD-SDI (BNC) input interface, 4 (Lotus) and video corresponding audio input interface; with 1 HDMI, 1 way VGA, 2-channel AV (BNC) output interface; has a 1-way Lotus audio output interface. The front panel has a USB port, two USB ports on the rear panel, one LAN network port, and one set of detection control terminals.
2, video storage
Supports two built-in 3.5-inch serial hard drives with a maximum of 3TB. That is, you can set the recording to 1 or 2 in sequence, or you can set 1 as the burning disc and 2 as the redundant disc (the same content is burned at the same time). Calculated by inputting 1080P60hz resolution, when HDMI input, single-channel recording takes up about 1.8GB of hard disk space per hour.
The machine supports an external hard disk connected through the USB port of the tailgate. When recording, you can select one channel for simultaneous recording.
3, machine operation mode
The machine supports operation control with a USB mouse.
4, support input, video and output resolution
The HDMI input supports 1080P60 to 480P; the SDI input supports 1080P30\25hz. The video resolution is 1080P30\25 to 480P. The output resolution supports 1920*1080P60 to the following various parameters. 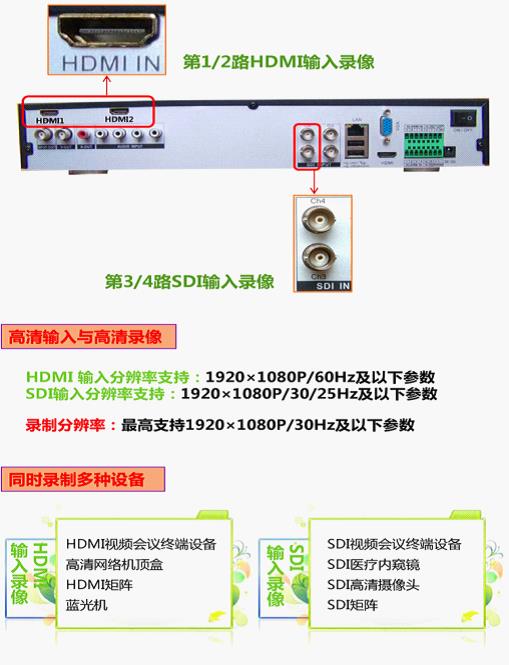 5, video mode
(1), manual control video
Use the mouse to turn the recording channel on or off at any time according to the recording needs. Click the right mouse button to enter the video control, and the channel that needs to be recorded is circled black, then click OK below, and the selected channel will start recording immediately. When you want to stop recording, you also enter the recording control, white the channel that does not need to be recorded, and then click OK below, the selected channel will stop recording immediately.
(2), boot automatic recording
Which recording channel is set before the power on is the recording state, and it is still in the recording state after the power is turned on. After the power is turned on, there is a signal input to record.
(3), timed recording
Each recording channel can preset 4 timed recording time segments, start recording at the preset opening time, and stop recording until the preset stop time.
6, audio mode (no audio, no need to consider)
When the HDMI input is input, the HDMI cable is supported to include audio input recording; when SDI is input, the input audio must be matched from the corresponding analog audio interface. When the HDMI cable contains audio, it also supports mixing audio recording (mixing function) from the corresponding analog audio port. When recording a digital TV set-top box, directly insert the HDMI high-definition line to realize audio and video synchronous recording; when recording a local conference, insert the video input interface of the high-definition camera, and then insert the corresponding analog audio to realize simultaneous audio and video recording. When recording a remote video conference, accessing the HDMI input interface of the recorder from the HDMI interface of the conference terminal, and then accessing the analog audio corresponding to the video from the local mixer, the remote local audio and video can be simultaneously recorded.
7, play mode
(1), four screens without delay live broadcast
Because the machine supports 4 channels of simultaneous input video, the default four-channel window screen is turned on; each channel has an input video screen when there is signal input. There is no channel for signal input, this window is black. There is a closed small speaker icon in the lower left corner of each channel. If you want to make a channel window sound, click on the small speaker to open the channel with a mouse click. The lower left corner of each channel has the number name of the channel by default. You can change the name or turn off the name display in the system settings. When the recording channel is opened, a rectangular video icon will be displayed in the lower left corner of the channel window; after the recording is closed, the recording icon will also disappear. The power-on and recording timestamps are displayed in the upper right corner of the screen, which can be turned on or off in the system settings. 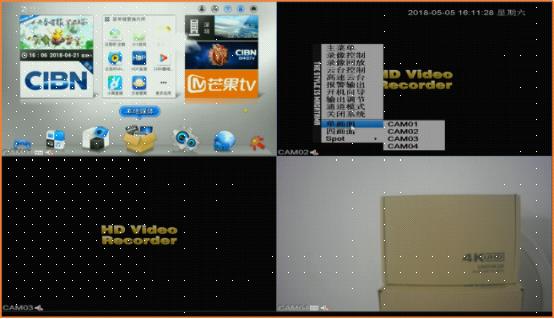 (2), one-click single window to enlarge live broadcast
According to the playback needs, you can zoom in on a window to full screen with one click. If it is turned off, it is an enlarged window full screen. After booting, it also defaults to the single window screen.
8, playback mode
The machine supports playback while recording. After recording or while recording, click the right mouse button to enter the video playback. Select the channel you want to play back. The machine supports four simultaneous playback, and also supports optional channel playback. Support channel retrieval, time retrieval. After clicking the search button, the recorded video files will be arranged in time on the right side of the screen. Double click on a file to play it back. When multiple channels are playing back at the same time, which channel is clicked by the mouse, the sound of which channel is heard. During playback, fast forward playback, full screen playback, and time point playback are supported.
9, video burning
Insert the mobile hard disk or the recorder into the USB port on the top of the dual USB port of the recorder's tail panel, and then you can record it to an external mobile hard disk or burn it to a disc.
10, video copy
The recorded files are stored on the internal hard disk, and the video data of the internal hard disk can be copied as needed. There are two USB ports on the tail plate of the machine. The USB port on the top is used for copying the mobile hard disk or U disk. The following interface is used to insert the mouse when copying data. Click the right mouse button to enter the system main menu, enter the recording function, find the hard disk backup, select the channel to be backed up, the recording time period, and select the video format you want to back up. The video file defaults to H264 format. When copying outward, you can select H264 or AVI format. It is generally recommended to choose AVI. Click to start copying, usually an hour of video files need to be copied in about 10 minutes. Copy files can be played or edited on a high-definition player or plugged into a computer. If the backup selects an H264 file, you need to play it with the player in the supplied disc. The player can not only decode and play high-definition video, but also transcode H264 video into a more editable file format such as MP4 or AVI.
Third, the network function 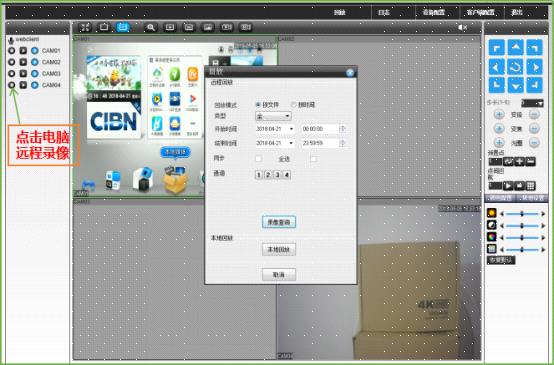 WHD video recorders, with rich network functions, are of great significance to customers who need network remote computers or mobile phones to broadcast and control. You can log in to the browser or download and install the client login management.
1. Webcast
The machine supports Internet, LAN remote computer or mobile phone for live broadcast. Even if you are not at the meeting, you can remotely attend or monitor the scene.
2, voice intercom
The machine supports video recorders to communicate with remotely logged-in computers or mobile phone customers.
3, network on demand
The machine supports LAN, Internet remote computer, on-demand video files that have been recorded to the built-in hard disk of the recorder.
4, network download
The machine supports Internet, LAN remote computer to download the video recorded to the built-in hard disk of the recorder to the computer. It is convenient for managers who are inconvenient to enter the control room of the video recorder to retrieve video data.
5, network video
The machine supports Internet, LAN remote computer, and recording with the recorder. Even if the recorder does not have a built-in hard disk, it can be recorded by a computer as long as the computer is connected.
6, network screenshots
The machine supports Internet, LAN remote computer, high-definition screenshots.
7, network control
This machine supports the basic system setting and timing recording of the recorder on the Internet and LAN remote computer. The camera pan/tilt can also be controlled by a computer.
Chunyuan Liying WHD series HD DVR, support 1080P60hz high-resolution input video, full input interface, HDMI (DVI), VGA, SDI can input recording, recording resolution reached 1080P30\25hz advanced level, output support 1920*1080P60hz. At present, the 1-16-way model has been introduced, and the input interface can be selected between HDMI (DVI), VGA, and SDI as needed. The machine can optionally record multiple channels or single channels, and can record and watch while recording without delay. Support multi-channel simultaneous playback, also supports optional single-channel playback. Supports built-in 2 3TB large-capacity hard disk recordings for continuous video recording. Video files not only support USB copy to mobile hard disk, but also support remote Internet, LAN computer, mobile phone for live broadcast, on-demand, download and remote video, screenshot, system settings and other rich features. In particular, the powerful mixing function of the machine not only supports single-channel audio and video simultaneous recording, but also supports mixing recording. Therefore, the machine is not only suitable for recording local conferences, but also suitable for recording remote video conferences. It is also suitable for general household recording digital TV set-top boxes. , Blu-ray high-definition player and high-definition surveillance at the same time!