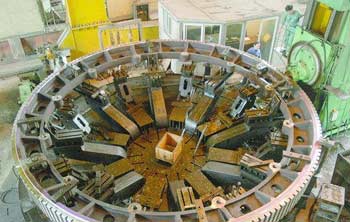 The major difficulties in the economic operation in 2012 included a sharp slowdown in demand growth, continued downward prices of products, almost all mechanical products being overcapacity, rising labor costs and financial costs, serious payment defaults, and a significant contraction in export demand.

Analysis of Supply and Demand Situation and Policy Environment of Machinery Industry in 2013: Domestic Demand Situation: The macro economy may be slightly warmer this year, but inflation pressure will be greater than this year. The form of external demand: The growth rate will continue to slow down, and there are many disadvantages in various aspects. The supply situation: The cost of procurement has been slowly rising, the pressure on financial costs has eased, the labor costs have continued to grow steadily, and the circulation of engineering machinery and other inventories is relatively large. The expansion of capacity expansion is the greatest danger. Industrial policy is very beneficial to the structural upgrading of the machinery industry.

The development trend of the main sub-industries in 2013 predicts that the automotive and internal-combustion engine industries will maintain a low growth rate of about 5%. The growth rate of the electrical equipment industry is lower than the average level of the machinery industry. In recent years, the growth of production and sales of machine tools and construction machinery has been excessive, and the amount of social possessions has been too large. Although the demand situation in 2013 was better than this year, it is also difficult to be optimistic. The estimated growth rate is below 10%. Instrumentation, cultural office, general petrochemicals, heavy machinery, basic parts, and food packaging machinery are relatively stable next year, with an estimated growth rate of around 10%. The agricultural machinery industry still has room for growth. Purchase subsidies are expected to increase. It is estimated that the growth rate will reach about 15%.

It is mainly used in the surface bonding, die, decoration, nameplate, decoration, postal, shoemaking, clothing etc., Instead of using adhesives, it can cost-effectively carry out various bonding, armoring, fixing, etc.